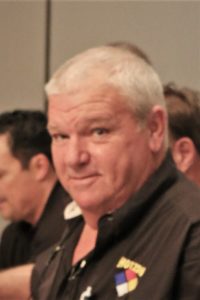 On Saturday, February 24th, we lost a Giant in the HazMat Community.  Kenny Harmon served as Vice President of HOTZONE since it’s inception in 1999 and was a true champion for training responders throughout the United States.  Affectionately dubbed “Mr. Hospitality”, he sometimes seemed gruff, but beneath that facade was a man who truly loved what he did and the people around him.  He worked tirelessly to ensure that those who attended HOTZONE had one of the greatest training experiences of their lives and always wanted them to take what they learned home with them to share with their co-workers.  His love and dedication will be sorely missed.  All of us at HOTZONE wish all the best for his family and promise that his legacy will never be forgotten.